Talking about Spanish daily routine is not easy at all because there are so many activities that can be done in a single day. Basically, grammar gets pretty confusing, especially finding the right way to conjugate reflexive and non-reflexive verbs. Do not worry, even native speakers think Spanish grammar is complex. Today we will highlight 10 pronunciation, spelling and grammar mistakes in Spanish daily routines that stand out the most in this topic. We hope you can avoid these mistakes when talking about your “rutina diaria”. Let’s start… 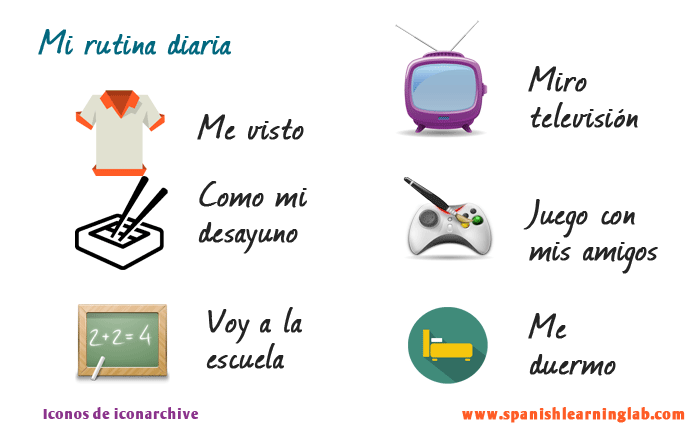 A list of 10 common mistakes in Spanish daily routines

In order to find these mistakes, we checked a series of videos that some students have uploaded on Youtube to talk about their daily routine in Spanish. We found analyzed some of these videos to find the 10 most common mistakes in Spanish daily routines, which we will explain next.

Mistake No.1: Placing time at the beginning – Ubicando el tiempo

The first mistake in Spanish daily routines is tricky. It happens when time is placed at the beginning of the sentence, not at the end. In order to say time in Spanish, we can use “A LAS + HORA” as in “a las siete” (at 7:00). The phrases “de la noche”, “de la mañana” and “de la tarde” indicate which part of the day you do things at. In everyday conversations, we often place the time after the activity, e.g. “Me levanto a las siete de la mañana” so saying “A las siete, me levanto” sounds a strange though it is not grammatically incorrect.

Something that makes Spanish easy is that we pronounce words the way they are written. It seems easy but it takes time to master this rule. The second mistakes happens when reflexive pronouns like “ME” and “SE” are pronounced as “MI” or “SI”. Make sure to play the recordings in our lessons to listen to the correct pronunciation of the content we share.

“La ortografía” (spelling) is hard even for native speakers. When it comes to writing about your daily routine, be careful to write the correct conjugation of the verbs and spell nouns and other parts of speech correctly too. Here are some examples:

There are many possible mistakes, but this is one of the most common mistakes in Spanish daily routines we found. Verbs represent represents actions, for example: “Bañarse” (take a shower) or “Comer” (eat), whereas nouns represent things or people like “Carro” (car). “LIMPIEZA” (cleanness) is a noun and “LIMPIAR” (to clean) is a verb. If you want to say, for example, “I clean the house every morning” then you should say “Yo limpio la casa todas las mañanas”. On the contrary saying “Yo limpieza…” would be wrong.

At this point you might be counting which mistakes in Spanish daily routines you do not make. Our next mistake happens when the verb “VESTIR” (to get dressed) meaning “PONERSE” (to put on). The activity “Yo me visto” means that you get dressed, but it is not correct to place an object (clothes) after the verb. Therefore, saying “Yo me visto en la mis pijamas” sounds very bad. Instead, this sentence should be “Yo me pongo mi piyama”. The reflexive verb “PONERSE” can be used with objects. It is irregular for the pronoun YO, so you should say “Yo me pongo…, Tú te pones…” and so on as in “Me pongo los zapatos” (I put my shoes on).

This mistake happens when we treat all verbs as Spanish reflexive verbs. Actually, many of the verbs in Spanish daily routines are regular verbs such “COCINAR, COMER” and “ESTUDIAR”. For this kind of verb, all you need to know is the rules for regular verbs in Spanish: “Yo como, tú comes, él come…” and so on. As for reflexive verbs, if you are talking about someone else then use “SE + verbo” as in “Se baña”, “Se viste”, “Se duerme” and to talk about yourself use “ME” as in “Me baño”, “Me visto” and so on.

This mistake can be funny and embarrassing at the same time because some verbs in Spanish daily routines can be easily confused with other type of words. Pay careful attention to the words “PEINARSE” (to comb your hair), “ALISTARSE” (to get ready), “MAQUILLARSE” (to put on makeup) and “ACOSTARSE” (to lay down). Remember that “LL” is pronounced differently in Spanish. It is also important to pronounce nouns such as “PEINE” (comb) and “PELO” (hair) properly.

Make sure to use the right sequence adverbs in Spanish to connect the activities. For instance, the use of the word “PRÓXIMO” (next) in the sentence “Próximo me visto” is wrong. Instead, we should say “DESPUÉS” or “LUEGO” as in “Después me visto”. “PRÓXIMO” is an adjective so it would be used right before a noun as in “El próximo año”.

Mistake No.9: Talking in the present, not the past – Habla en el presente, no en pasado.

Sentences and questions about this topic are often created using verbs in the present tense. From all the mistakes in Spanish daily routines we watched in the videos, one you can easily avoid is using the past tense instead of the present tense of verbs. Imagine you want to say “I go to school at 8:00 am”. The right translation would be “Voy a la escuela a las 8 de la mañana”, not “Fui a la escuela a las 8”. “FUI” is the past tense of the verb “IR” (to go)

The last mistake we noticed is about using the wrong Spanish definite article before a noun. Unlike English, Spanish has several words for definite articles: “EL, LA, LOS, LAS”. Therefore, when writing or saying you daily routine in Spanish be careful to use the right article, for example: “Me pongo el camisa” (I put on a shirt) would be wrong because “CAMISA” is a feminine noun so we should say “Me pongo la camisa”.