In our course BASIC SPANISH I, we cover a lot of different ways to introduce yourself and others. However, we did not discuss much about the normal situations in which people will introduce themselves to others in Spanish-speaking countries and when to formally or not. We will take a look at 4 common situations in which people use greetings and introductions in Latin America.

People in Latin America are very helpful and when they see someone struggling with the language, they do their best to help. It is both fun and nice to see others to say things in our language. To approach a person, we often say “Disculpe” or “Disculpa” to ask for help or to begin a conversation. When meeting people in the streets, we often talk for a while with that person before saying our name or asking theirs. Some people actually like talking a lot and will tell a lot of things before saying their name. 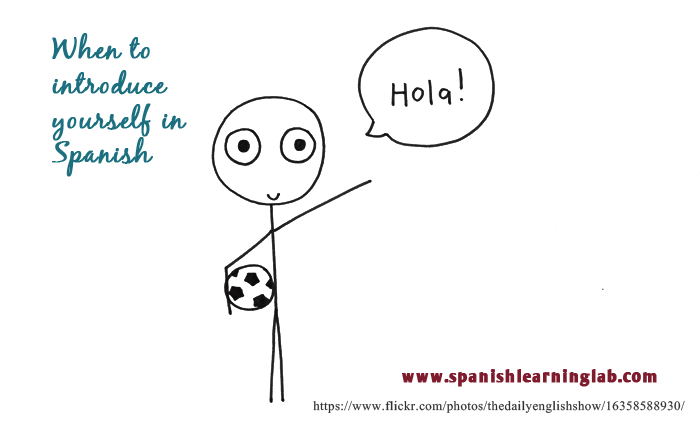 Introducing a friend in Spanish –Presentando a un amigo

This is probably one of the most common situations in which introductions and greetings. In order to introduce a friend in Spanish, you can begin with “Ven, quiero presentarte a alguien” (Come, I want to introduce someone to you) or “¿Te puedo presentar a alguien?” (May I introduce someone to you?). Perhaps you want your friend to introduce his/her friend to you, in which case you can tell him/her “Presentame a tu amigo/a” (Introduce your friend to me). When introducing a friend in Spanish, try to choose the best greeting according to the person’s age and the formality of the situation.

The school, “la escuela”, is one of those places where people introduce themselves frequently. Sometimes, teachers will ask you to introduce yourself in Spanish as a way to learn more about you and let your classmates know who you are too. A very simple introduction like “Me llamo + nombre” would work in such a situation.

Having a Job Interview in Spanish– Entrevista de trabajo

A job interview can get really formal. There could be even need to use very polite Spanish phrases such as “Es un placer conocerlo” as in “¡Buenos días! Mi nombre es Alan. Es un placer conocerlo” or “¡Gracias por esta oportunidad! Mi nombre es Alan. Encantado de conocerlo.” For a job interview in Spanish, it is also important to ask the other person’s name in a formal way using ¿Cuál es su nombre? or ¿Cómo se llama usted?